Click on the titles to find out more details and how to register. More details will be added daily so do please check back.

College governance and COVID-19: sizing the problem and addressing the risk (03.04.20)

A level and GCSE summer assessments, 2020 implications for colleges (recorded 07.04.20)

Webinar: How to manage centre and assessed ranking for GCSE and A Level’s (recorded 07.05.20)

The boss of the Association of Colleges has told his members Ofsted is “quite right” after the inspectorate found some colleges risk giving students “false hope” by putting them on courses where there are slim job prospects.

Amanda Spielman, the chief inspector, drew gasps from delegates at the AoC conference this week when she questioned whether some colleges are chasing income over students’ best interests 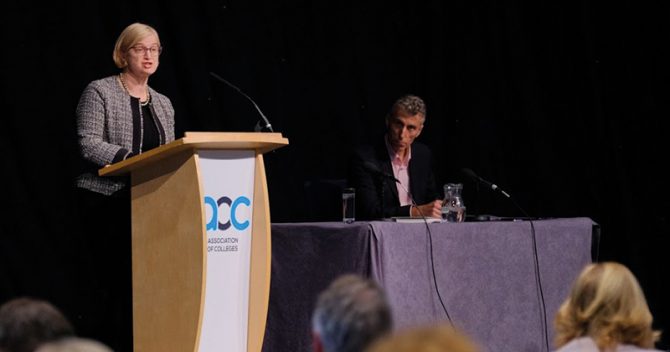 She was referring to the inspectorate’s new report on level-two qualifications which found some subjects, namely arts and media, “stand out” as areas where there is a “mismatch between the numbers of students taking courses and their future employment in the industry”.

“Some students get a bit deflated and lose that momentum they built when they discover it is an impossible dream for most of them,” she said.

There was push back from the audience during a question-and-answer session, in which Grimsby Institute principal Debra Gray pointed out that the arts and creative industries contribute “£92 billion to the UK economy, two million people work directly in creative industries and three million work in allied professions where people are creative in non-creative businesses”.

“That doesn’t sound like an impossible dream to me, and it isn’t one that we sell to our students,” she told the chief inspector, before receiving a round of applause from the audience.

AoC chief executive David Hughes stepped in on the debate and said that colleges need to “face up to the fact”. END_OF_DOCUMENT_TOKEN_TO_BE_REPLACED

Julian Gravatt, Assistant Chief Executive of the Association of Colleges, said: “AoC will continue to work with the Government of the day to ensure that the important work of colleges is understood and recognised. Elections cause some delay in decision-making. Our priority in the next few weeks will be to resolve areas of uncertainty around apprenticeships and college restructuring.

“It is also unfortunate that the planned date (8 June) takes place in one of the busiest GCSE and A Level weeks, which may create some logistical problems in some constituencies. The last time an election happened in June was in 2001.

“We will work with the future Government, whatever form it takes, to promote, represent and support colleges’ best interests.”